Whilst the history of Quakers Walk is not at all clear,  what is known is that the walk was across the New Park Estate.  New Park was established as a deer park by 1157 and extended for 130 acres. Although they were earlier buildings, an exceptionally fine house was designed by James Wyatt in 1780 for James Sutton and his wife Eleanor (sister of Lord Sidmouth, sometime Prime Minister). Sadly this was demolished in the 1940s by the County Council who also sold part of the estate to the Merchant Venturers.

We have a late 18th century map which shows the (then) new house together with a drive that divided, the one heading for Devizes town and joining with Quakers Walk; the other a carriage drive onto the London Road.

There is concrete evidence that Quakers Walk formed part of a public footway, because in 1817, the owner of New Park arranged for the public footpath which, somewhat inconveniently came quite close to the house, to be diverted to avoid the House and its curtilage. In passing it is of some interest that, according to the legal instrument drawn up at the time, this was done to make the walk easier by going round a hill rather than over it!  The actual old and new routes are shown on the drawing appended to the Deed. This document establishes beyond doubt that Quakers Walk has been a public right of way for over 190 years.

Perhaps the most exciting of the documents provided by Mr Wilkinson is a copy from a glass negative of Quakers Walk, believed to have been photographed in the 1890s. 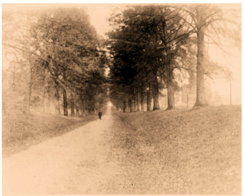 It shows how well kept the Walk was in those days.

Further information from Mr Wilkinson indicates that the urns on the gate piers at the entrance to the Walk were not original. He believes that one came from Whitton Park in Middlesex, the home of the first Lady Roundway and the other from Bedborough Lane, the original name of London Road.

However it came about, it is clear that Quakers Walk has been valued as a footpath of particular charm for many years. The Trust, together with the Friends of Quakers Walk are committed to keeping it that way so future generations can enjoy it.

Details of Data Controller are