Devizes sided with Matilda in the Civil War with Stephen for the crown of England following the death of her father, Henry the First. With its imposing castle, Devizes was an important town to have as a base and, in 1141, Matilda granted the town the right to hold a market in gratitude for the help the townsfolk had given her.  It is probable that the site of the original market was near the Castle Hotel.  Certainly there was a market there as the name "Monday Market Street" suggests.  We are not sure as to when the market moved to its present location but we know that a market has been held continuously in the town since the 14th century and for the last three hundred years that has been on a Thursday.   That market thrives today. 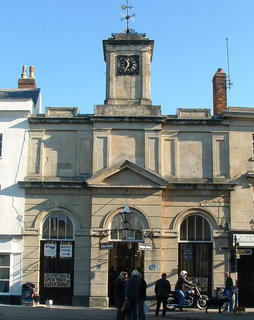 What of the Market Place itself?  Many of the buildings now converted to shops were originally inns of which only three remain.  In the corner is the Shambles, site of the medieval butchers' market, later turned into a covered market for a variety of produce.  The present remarkable building was designed in 1835 by Pollard of Frome. It has been updated inside very recently to increase its attractiveness as a multi-purpose market.  Go inside and you will find an interesting notice displaying the market rules at the time when it operated as a cheese market

Back to the Market Place again and in the centre are two monuments, the Market Cross and the Estcourt Fountain

The Market Cross was designed by Benjamin Wyatt and was given somewhat begrudgingly by Lord Sidmouth.  He was Member of Parli 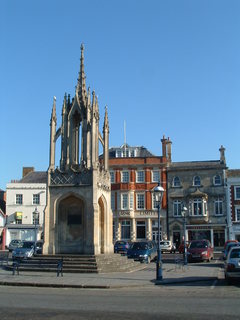 ament for the Borough from 1784 to 1805 and Prime Minister from 1801 to 1804. Apparently (and not unusual for a politician) he seemed to have forgotten an earlier promise to erect a cross way back in 1797, but the townspeople managed to persuade him and in 1814 the Cross was built.    It is well worth a close examination for there is a plaque that bears a chilling account of the sudden end of Ruth Pierce of Potterne in 1753.  On being accused of theft, Ruth protested her innocence and called on God to strike her dead if she were telling a lie.  It seems the Almighty took her at her word and the stolen money was found in her dead hand. Her memorial here serves as a salutary lesson to others! 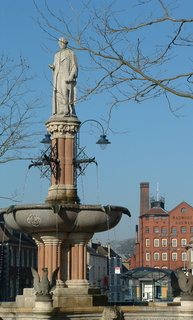 The Fountain is a memorial to T. H. Southeron Estcourt, who founded the Wiltshire Friendly Society in 1828 and was Member of Parliament for Devizes from 1835 until 1844 and for North Wiltshire from 1844 until 1865. Friendly Societies were invaluable to the working classes, enabling them to provide mutual assistance when in financial need. Estcourt worked tirelessly for the Society, firstly as Secretary and then President.  His interest in the poor was a life-long one and he became President of the Poor Law Board in 1858. The fountain was funded by subscriptions from a grateful public in 1879. The fountain was the first use of the public water supply in the town and needed some last minute modifications because of the pressure.  When tested the water jets were so powerful that they missed the bowl and sprayed the surrounding area.  Pictures of the opening reveal the novel solution to that problem: watering can roses can be seen attached to each outlet! 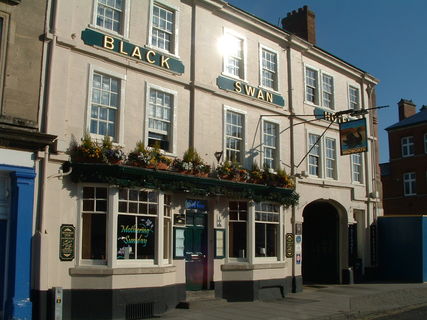 Along from the fountain is the Black Swan. This was originally known as the Nag’s Head and was built circa 1600. It was re-fronted in 1736-37 when it became a coaching inn.

On the other side of the road you can see the Corn Exchange, with a statue of Ceres, the Roman goddess of agriculture on the top of the parapet.  This was designed by William Hill of Leeds and completed in 1857. 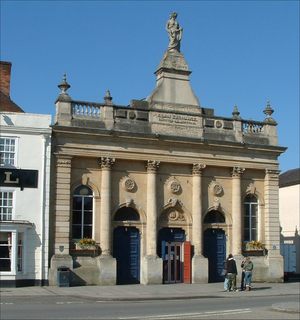 Agriculture played a very large part in the town’s economy, given all the rich farmland that surrounds it and it follows that the Devizes Corn Market was a busy and large affair and was said to be of national significance during the eighteenth and nineteenth century.  The importance of agriculture in World War II is also underlined by a very small plaque on the wall to the left of the main doors. This records the gratitude of the local farmers to the Women’s Land Army.

Next door is the Bear Hotel.  The bear which today stands on its porch formerly stood on a double column in the middle of the Market Place. It was moved to its present location sometime in 1806.

This hostelry can be traced back to 1599 when John Sawter was landlord. Undoubtedly the best known of The Bear's occupants was the future Sir Thomas Lawrence, the fashionable portrait painter who came to live here as a young boy when his father became the landlord in 1773. The inn became renowned for the sketches of its 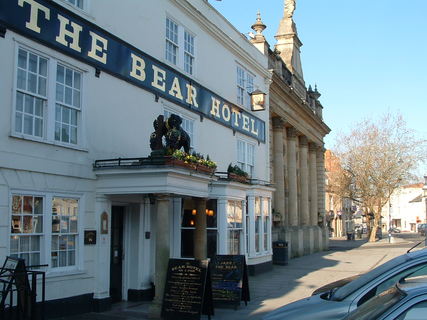 customers made by this talented son of the landlord. The elder Lawrence was active in promoting his inn and is said to have erected posts on Salisbury Plain as a guide to travellers.  To accommodate the resultant growing trade a re-fronted early eighteenth century Bath stone extension with wrought iron veranda was built on the south side of the hotel.

Details of Data Controller are